What is Rocket Yoga?

Rocket Yoga, Rocket Vinyasa Yoga, The Rocket, Rocket 1,2,3?  With this style running up the popularity ladder that are a lot of people who are left asking simply... What is this Rocket Yoga!?

Whether you have just heard about it or noticed the buzz building over the past 10+ years its only a matter of time before it is in your neighborhood!  Maybe you have practiced the class before and you know what you think about it or maybe you have never even done a class but still have an opinion on the name itself.  If you have done a few classes and "think" you have it figured out then guess again!

This practice can be deeper and more illusive than the traditional Ashtanga Yoga practice itself!  And yes!  Rocket Yoga is an Ashtanga Yoga System ;) Let the process begin.

Rocket Yoga is an Ashtanga Yoga System created by Larry Schultz from San Francisco who was a dedicated student of Pattabhi Jois and always mentioned to me teachers like Danny Paradise and David Williams as his teachers along with Pattabhi.  Larry spent many years practicing the mysore method and with my time with him it seemed to stick.  He was always awake around 4am...kicking me out of bed early to practice silent morning prayer through our asana.  Early practice was important to Larry and integral to the practice.  We also had slamming classes at 4:30pm everyday so we usually did 2 practices a day. Once in the morning and once in the afternoon.  We never really worked until after noon and always used the morning to practice and take walks in the park to talk about what we were going to do the for day and chat about the yoga world and what it was becoming.

I could use this blog to copy paste what you would find on any web page about how the Rocket is a derivative of the 1st, 2nd, and Advanced series of traditional Asthanga Yoga and its know as a invigorating; feel good series that bring vitality and health to the practitioner.  It was a practice Larry created while on tour with the Grateful Dead, but I think it would be best to stick to directly what the Rocket Sequences provide and how they effect the mind/body.

for general information you should visit the It's Yoga International site @ www.itsyoga.net


Also how does the Rocket Yoga practice draw us into a state of inspiration. A place where we can breath in our spirit and cause the rapture of life to be present within us at all times.  How can the Rocket do this!? its simple science really.

First of all its good to make sure people know that the Rocket System is split into almost 6 different Routines which is placed in a manor to allow access to the super beginner and those who feel as though they are not flexible enough or strong enough to begin a vinyasa practice.  The first sequence of postures is nothing new at all in practice. Simply referred to as "MDR" or "minimum daily requirements" students are encouraged to take on a daily practice that consists of Sun Salutation A and B followed by a short seated meditation and rest.

Another series in the Rocket System created by Larry Schultz is the Rocket 1 series which is an all level series that rearranges the Standing Primary Series asana into a very clever flow of postures that keeps the transitions all on one side before shifting to the left side.  Very different from the traditional right/left practice, but those who have studied will recognize this as a method taught by Krishnamacharya himself.  So there is nothing really new about it at all:)  But it sure is a jolt to the bodies vital energies and it creates a spike in the nervous system that is good for people who are feeling drained from work or stress from family or social responsibilities. This is a short series that is mainly standing series asana with only a few seated poses depending on the students capability.  All levels enjoy this practice and flow.

Another series is the Mixed Levels class that is often referred to Rocket I as well.  Its is the revision of the standing series of traditional ashtanga with a "Modified Primary Series" placed onto the end of the standing asana.  This is a beginners version of primary series where students are allow to remove postures of difficulty like half lotus postures and intense flexibility postures like supta Kurmasana:  Binds are also modified with straps and blocks can be used as well.  There is no strict attitude or restrictions on what a student needs to find comfort within themselves.

Another series is the Rocket 2.  This is the sequence that follow a modified 2nd series with Advanced A & B Postures added in as transitions between the base line of postures that any Ashtangi would recognize as a half 2nd series.  The typical postures that are chosen from the Advance series are the inversions and deeper hip openers.  There is also a ton of specific transitions that students may choose from to make the practice more challenging or more modified.  This gives the teacher a special place where they can led large group classes but still allow mixed level students to participate.  Unlike traditional Ashtanga where students can only do poses that are given by their external guru.  Although I do like their rigidness and exclusiveness ... I still favor the all inclusive vibe that is celebrated in the Rocket Vinyasa Yoga System.

If there was ever the idea of advanced place to the Rocket practice it comes from here, but all in all.. Rocket Yoga is designed to be a modification of the Traditional Ashtanga Yoga series that is a little more difficult to climb so to speak.  Everything is relative.  But to place this series against regular popular power yoga and vinyasa yoga practices and there is no doubt that the Rocket Yoga sequence literally is way more physically advance and intelligently sequenced by far.  These series are already almost 20-30 years old.  For modern/western yoga there is very few solid and set sequences of postures that has made it that long without shifting into something that is totally different.  like Traditional Ashtanaga... Rocket Yoga is here to stay!

Another series is called the Rocket 3 and it is a longer variation of the Rocket 1 and 2 series.  This class can be seen as a higher pace, but ofter people feel like its easier on the body and nervous system since the stimulation of the primary and 2nd series asana are put into the same class.  This is Rocket style therapeutics and all the postures from though out the week are accumulated into series that puts everything together.  Typically this practice is done on Friday afternoons which is the last class of the weekly schedule.


Another series in the Rocket system comes back around to the source... Full Primary traditional count as taught by my teachers:)  We always practice the traditional series at least 1 or two times a week.  Usually on Sunday to start the week off right.  People who are more involved in the traditional series like myself also offer mysore and work to climb the amazing Ashtanga Yoga mountain!  To honor the tradition is part of our practice, but we do not wait for anyone to give us our poses.  That's for followers and we practice to be leaders in our communities.  No hierarchy in this system.  And for people who need rules and people to tell them what to do next.  For the western mind that needs to be told "NO" at 6am in the morning... well that's your thing and this is ours... We love this world.  We really do have freedom to do as we choose.  \

Rocket Yoga is the "YES" Yoga of the Ashtanga Yoga world.  Yes you may take ownership of your yoga practice.

I will be able to break down more details about the series as people ask or feel free to search out a qualified Rocket Yoga teacher in your area!  let me know where you are and I can help you find one.

More to come time to sleep and wake up early for the sun!

*an uneducated point of view

Below is the oldest form of Rocket Yoga Cheat SheetS!! 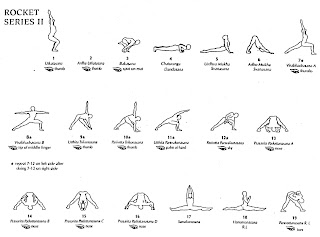 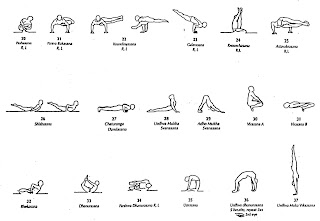 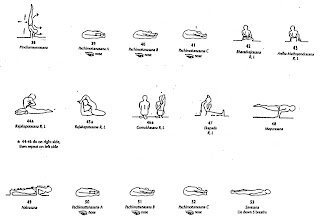 Yogi David Kyle
Student of yoga and facilitator of this wonderful experience of control and absolute satisfaction that is gained in yoga practice. I live in San Juan, Puerto Rico and own/opperate a yoga studio with my lovely wife Elizabeth and my little baby girl Lua as well as Dalai my baby boy. She is my proof that it all works and he is my proof that that its not all under my control:) I travel through the United States and South America to lead certification courses in Beginners Ashtanga Vinyasa Yoga and Advanced variations of Hatha Yoga. Read my blogs and you can find out more information about my life and opinions ;)